Edwards Air force Base is a US AFB located in the Antelope Valley on the borders of Kern County, Los Angle County, and San Bernardino County in California. Edwards is designated as the Air Force Flight Test Center or AFFTC on June 25, 1951. It is also home to the USAF Test Pilot School, AF Research Laboratory, and NASA Dryden Flight Research Institute. Originally the land was acquired in 1932 by solders from March Field in Riverside to set up tents and create a bombing range for bomb crews. The area then was referred to as Mohave Field, then Muroc Field.

The current Name of this base is memory of US Air Force test pilot Glen Edwards who died along with 5 other crew members on June 5, 1948 while testing the Northrop YB-49 Flying Wing just north of the base. This name change took place December 8, 1949. 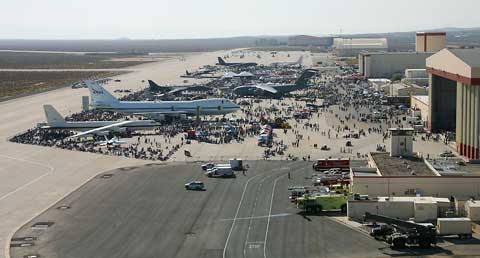 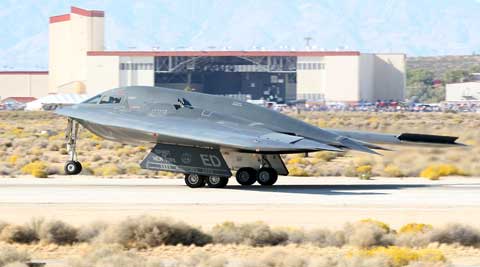 Since the 1950s there have been over 200 special test programs that have taken place at this base, and almost every US military aircraft has been tested or partially tested here. Edwards has also been the site of many aviation break through, such as Chuck Yeager’s flight in the Bell X-1 that broke the sound barrier on October 14,1947, and the around the world non-stop flight on only 1 tank of fuel in 1986 of the Rutan Voyager by Dick Rutan and Jeana Yeager.

Presently at Edwards, flight tests and the evaluation of improvements as well as tests on new systems are being conducted by both military and civilian personnel working together to improve engines, radar weapon delivery and navigation systems, and to help pilots have a system giving them the ability to strike ground targets from high altitudes at night in poor weather conditions.