Is military base in Illinois

This Base was the site where Fort Armstrong was located, and was originally a government site but now serves as the largest United States Army arsenal for manufacturing weapons. Liberty Mark VIII tanks were made at the Base for the 1st World War and as such recognized as a historic landmark. Arsenal Rock served as an army prison during the American Civil War, where captured soldiers of the Confederation were detained. The facilities were hurriedly built when there is notice of arrival of new prisoners.

The arsenal is a successful military equipment manufacturing center, with products including M1A1 gun mount and the M119 howitzers and M198. The center also manufactures grenade launchers, recoil mechanisms, artillery, gun mounts and aircraft weapons subsystems. The military staff strength of the artillery is about 250 and about 6,000 civilian workers. A military cemetery, adjacent to the arsenal serves as the burial ground for over 1,964 prisoners of the confederate and Union Guards numbering 125. 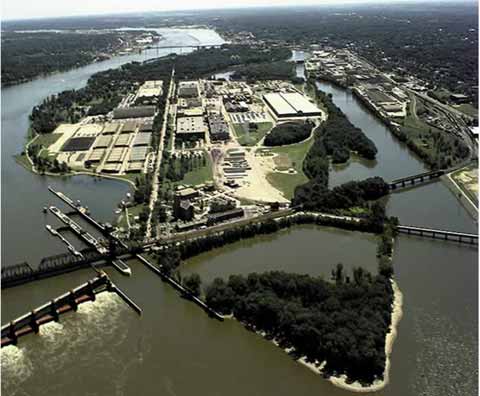 Also, 49 members of the Colored Troops of the United States who died from diseases of exposure were also buried there. The arsenal also has other historic sites that serve as tourist sites. The Col. Davenport’s House is visited by many people and also where the first bridge was built across the Mississippi. The officers’ quarters which are located along the Mississippi river and the Cemetery of the Confederate are also visited. The Stone Workshops of the 19th Century and the Rock Island National Cemetery, both located on the Rock Island Arsenal are also regarded as historic sites.